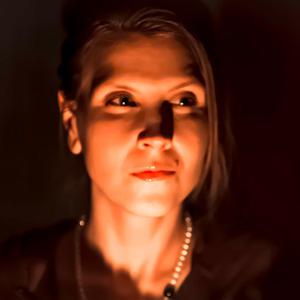 Lisa Menzel’s ancestors were immigrant farmers in Minnesota who fed the mocked and starved Chief Medicine Bottle in their soup kitchen. In November of 1865, he was executed after a dehumanizing trial for his role in several raids during the Dakota Wars. After WWII, her grandfather went to work in Chicago for R.R. Donnelley, publishing many Native American accounts including the works of Charles Eastman and autobiography of Chief Black Hawk.
She began her writing career as a Chicago rock music journalist for Lumino Magazine, interviewing the likes of The Offspring, Local H, Jeremy Enigk and Kasabian before becoming a screenwriter, director, cinematographer and editor. Her debut dark fantasy feature, Thinking Speed, was honored by Women in Film & Television. Today, she is a producer, developing several series’ and films. She is an award-winning portrait and nature photographer, whose work has been published in American Road Magazine. Splitting her time between Los Angeles and the Midwest, home is above one of Chicagoland’s most haunted cemeteries along the I&M Canal.
Available Titles

Sign up now to receive information about Lisa Menzel, including news and special offers.