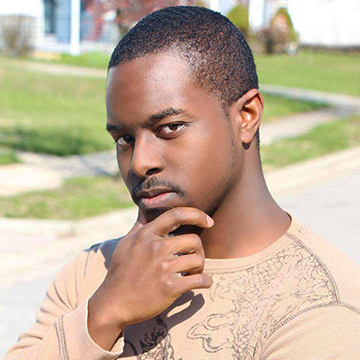 Lonnie Davidson was born and raised in Columbus, Ohio. Growing up, he spent his summers at his father's home, in Pennsylvania, where his imagination and writing skills were cultivated. Often, he and his father would watch old cartoons, and movies both foreign and domestic. They would read comic books, as well as play board and video games. This variety of animation and role playing developed Lonnie's appreciation for the artistic imagery as well as the stories and moral lessons they taught.
During the school year, his mother would push him to reach higher levels of academia. When he wasn’t doing school work, Lonnie was filling the pages of notebooks with fantastical stories. Over time, with his mother’s motivation and his father’s inspiration Lonnie graduated top of his high school class and went on to receive his Bachelor's degree from Ohio University (OU? Oh yeah). Although his degree is not in literature, he never lost the passion for storytelling or the love for creating a world outside of the one we know.
Even as a man, Lonnie has never lost that child-like love for story telling or letting his imagination run wild on paper. Through his works, Lonnie hopes to paint a vivid picture with words of the worlds that occupy his imagination.
Available Titles

Sign up now to receive information about Lonnie Davidson, including news and special offers.